NOTE: this prototype requires a web browser with WebGL support. Check if your browser can display WebGL content by following this link: https://get.webgl.org/ and, if needed, update your browser. The speed at which the model can be manipulated is limited by your graphics hardware. Works better with Chrome.

Institut Cartogràfic i Geològic de Catalunya (https://www.icgc.cat/, @ICGCat) is the cartographic agency of the autonomous government of Catalunya. It’s mission is to produce and disseminate the geoinformation of the country. Geostart is the development group at the ICGC focused on innovation and prototyping of products and services based on geoinformation.

Today at the Betaportal we present you two new 3D models: the Temple Expiatori de La Sagrada Família and the Eixample de Barcelona neighbourhood around the temple. Both have been generated from the images captured with our oblique photogrammetric camera, mounted on our own aircraft on a flight from december 19th 2014.

Eixample neighbourhood of Barcelona around Sagrada Família temple
This model covers an area of 1900×1200 meters and is composed of 730 million points (and thus it could take a while to load , and could be difficult to manipulate) and the level of detail of the structures and textures is a compromise between quality and speed. 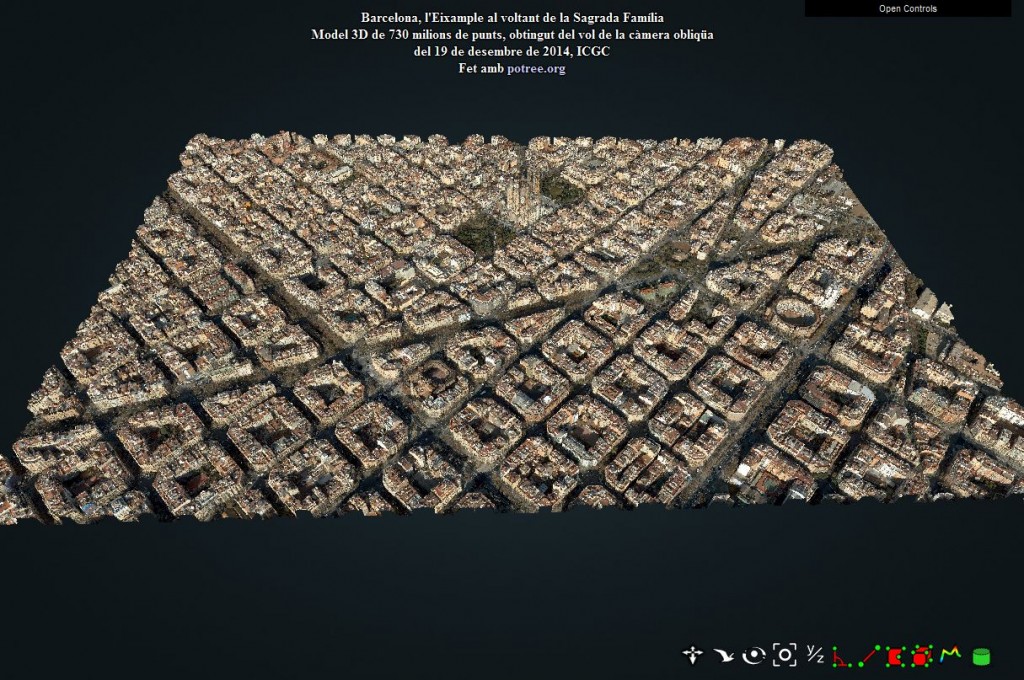 3D model of the Temple Expiatori de La Sagrada Familia
Derived from the same flight as the previous model, this one has been processed to obtain a much higher level of detail without compromising speed and at the same time tower cranes have been erased from the scene.

We use use Potree to bring these complex 3D models to your internet browser. Potree, which is a WebGL based point cloud viewer for very large datasets based on Scanopy, and licensed under the FreeBSD license, provides a set of tools to obtain precise readings and data of the models as distance measurement, areas, volumes, profiles and angles.

Please send us your thoughts and comments to betaportal@icgc.cat. These are key for the future development of tools that could be useful to all.